By Leah Loscutoff,
Archives & Special Collections Librarian
Special thanks to Doris Oliver, Assistant Curator, for her assistance with the research for this blog post.

Since 1976, the month of February has been officially designated as Black History Month.

In the year of 1924, DeHart Hubbard was the first African American to receive an individual Olympic medal for the long jump. That same year Shirley Chisholm was born in Brooklyn, New York. She went on to become the first African-American woman elected to Congress in 1969.

Also in 1924, the first African-American student graduated from Stevens Institute of Technology. Randolph Montrose Smith was born in Barbados in 1901. He was just two years old when he arrived in New York City in 1903 on a ship named theCearense. Unfortunately, not too much is known about Randolph, but we do know that he lived in upper Manhattan on West 140th Street while attending Stevens.

Searching the 1930 census records we also learned that he was working as a Civil Engineer for the Manhattan subway system after he graduated from Stevens, an excellent job opportunity for Civil Engineers at that time! Stevens Institute of Technology also created a scholarship in his name to which undergraduate students may apply.

Black History Month is a time to recognize the central role and achievements of African Americans in U.S. history and in our local communities.  Stevens Institute of Technology is committed to diversity here on campus, and to celebrate Black History Month, the library wants to briefly highlight some of Stevens accomplishments by African-American alumni throughout the month. We will be posting more about the accomplishment of African Americans and Stevens during the month of February.

Stevens' Alum Worked To Better Living Conditions of Many

Archives & Special Collections Librarian
Special thanks to Doris Oliver, Assistant Curator, for her assistance with the research for this blog post.

During his undergraduate days here he held a four-year Edgar B. Bacon scholarship and participated in numerous social and professional activities, which included involvement with the “Stute” and the Dramatic Society.  He was elected to the Tau Beta Pi fraternity and was also on the Dean’s list. He’s described in the 1936 Link yearbook as one of the most active members of his class. He was well known around campus and had a great academic record.

As described in a 1987 article in the Stevens Indicator, Braxton went off to have a successful career. He held positions as chief engineer for a general contracting firm and as instructor at Howard University in Washington D.C. He entered Harvard University in 1945 and was awarded a Julius Rosenwald Fellowship for graduate studies in regional planning. He earned the Master of City planning degree from Harvard Graduate School of Design. 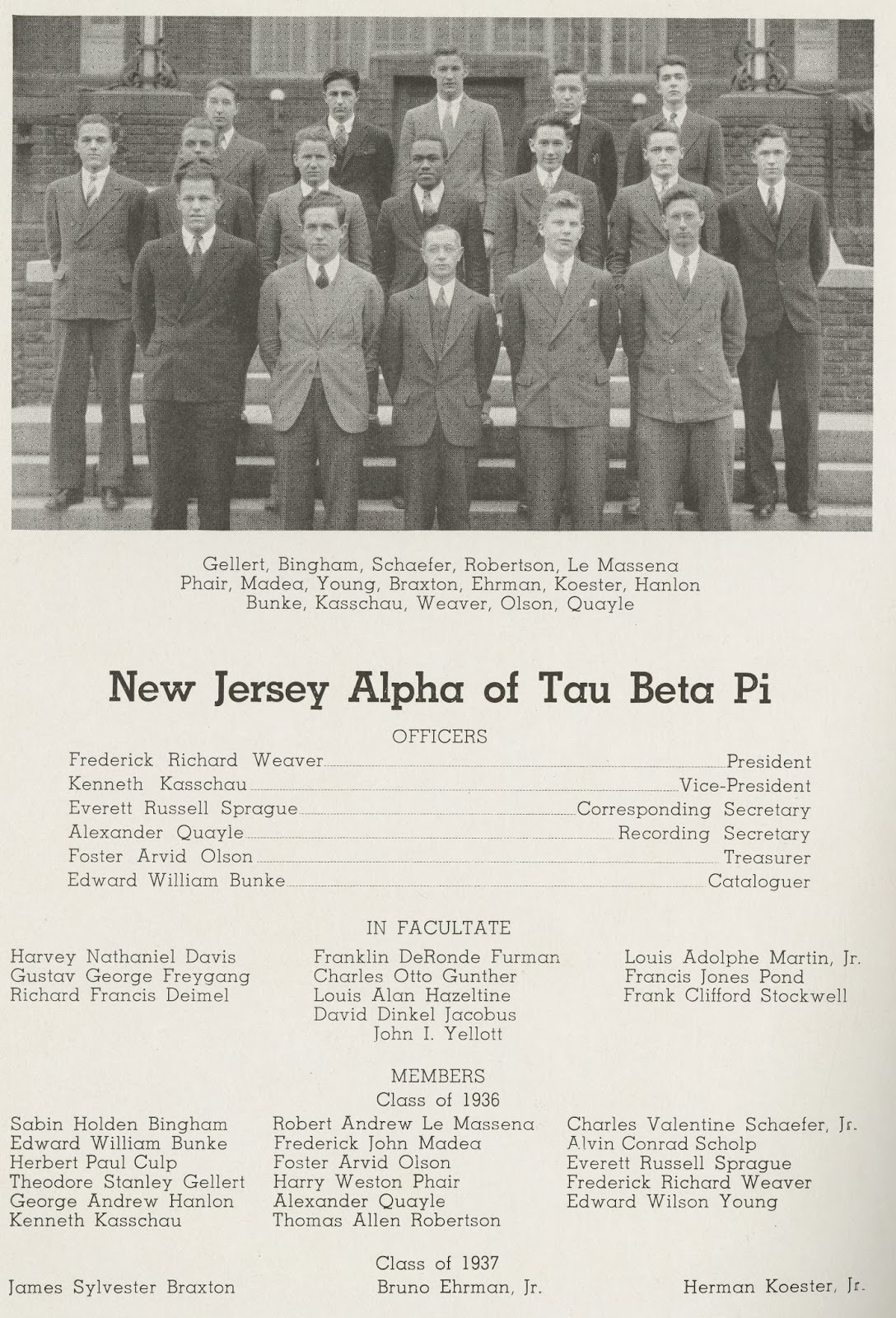 After graduating from Harvard, Mr. Braxton moved into a new phase of his career. He was led by his lifelong passion to design and manufacture low-cost housing systems.  After working as site planner of international housing projects for the New York firm of Skidmore, Owings and Merrill and the International Basic Economy Housing Corporation, Mr. Braxton became supervising senior planner with the Chicago Housing Authority in 1950. In 1965, he assumed the position of assistant chief engineer with the Metropolitan Sanitary District of Greater Chicago. In 1981 Mr. Braxton left this position to become Vice President of Globetrotters Engineering Corporation. He continued his dream of producing reduced cost housing systems. As president of Braxton Inc., he has patented the Braxton Inc., which is a system of manufactured housing that can be assembled by unskilled labor with a minimum of training.

In 1987 Mr. Braxton returned to Stevens to receive an honorary degree and was quoted as saying:

“I have enjoyed being an engineer. It has both stimulated and satisfied my curiosity. My engineering training has enabled me to be more creative . . . Last year, I obtained a U.S. Patent on a systems approach to housing construction. Although the system will permit construction of any type building, anywhere, the shortage of affordable housing, and the presence of so many unemployed in the inner city make it an attractive starting place. For example, I would like to see pilot projects in Newark and Chicago. I believe that a properly-designed housing system such as the one I am developing, erected by semi skilled workers could cut the cost of decent housing by a factor of one third to one half.”

Mr. Braxton accomplished much during his amazing career, and we would like to honor him this month of February, which is Black History Month. He spent his life’s work on bettering the conditions of his fellow man, and his ingenuity and determination is inspiring. Mr. Braxton will turn 100 years old this year, and still lives in the Chicago area.

The pictures above and research was taken from the Stevens Archives and Special Collections.